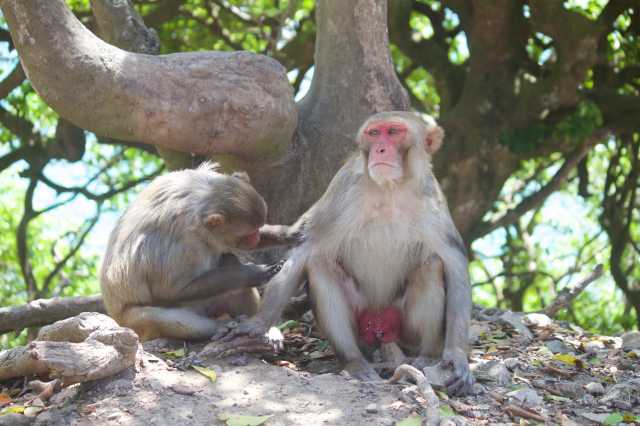 Rhesus macaques are odd. Particularly, if you come to them from studying chimpanzees, which was true for me when, in late 2012, I went to Cayo Santiago, in Puerto Rico, to spend about 1.5 years with these monkeys.

In chimpanzees, males spend their entire lives in the group they were born into. They know each other well and some of them form strong affiliative bonds. In rhesus, males usually leave their natal group shortly after reaching puberty and immigrate into a new group where they will seek mates and reproduction. Unlike chimps, male rhesus macaques don’t seem to care about each other very much and male-male friendships are not known to exist. At best, most of them appear indifferent about their male group-mates. A stark contrast to the strong, cooperative, intense relationships I have seen among chimpanzee males. In both species males form clear linear dominance hierarchies but while among chimps there is intense aggressive competition for the alpha position, this is not the case among rhesus males. Instead, male rhesus macaques are known for an unusual system of rank-acquisition: they queue for rank rather than fight for it. It’s called succession-based rank-acquisition and each male start out at the very bottom when he moves into a new group. With time, as males above him in the hierarchy die or emigrate to other groups, the rank of the newcomer increases, until eventually he may get to the alpha spot. This was the picture I got from all the papers I read about rhesus macaques before travelling to Puerto Rico.

I spent October and November 2012 figuring out who is who in my study group and how they interact with each other. It was the non-mating season. Most females had already given birth in the preceding months and were raising their infants. The males spent most of their time relaxing, feeding and not doing much else. Although the literature had prepared me for what I saw – I was still surprised to see how little they engaged with each other. Very little grooming, little proximity, just a lot of aloofness. If chimpanzee males were like the raucous members of a football team who, most of the time, got along splendidly, enjoyed each other’s company and did things together for the fun of it, rhesus males, on first impressions, were just a bunch of random guys hanging out at the doctors’ waiting room – respectful of each others’ space, polite but somewhat cold and indifferent to one another*.

(*Beware the anthropomorphisms! This is clearly a simplified/exaggerated description of male social relationships but it does convey my subjective impression of the differences between these two species.)

Trying to figure out the male dominance hierarchy in my rhesus study group (Group S) wasn’t as easy as I expected. There were few clear indications of who was the alpha and where each male fitted in the hierarchy. I talked to other researchers and staff of the Caribbean Primate Research Center to get their perspective and I collected data on even the subtlest agonistic (non-friendly) interactions between males that I could discern. One such subtle signal of existing dominance relations is the so-called approach-avoid interaction. One male would be walking in the general direction of another male and the other would actively avoid him by moving to the side and away – even in the absence of any specific threat from the approaching male. The one who avoids is lower down the hierarchy than the one who is approaching. Another good sign of high rank was the way an alpha would ‘carry’ himself around the group. I would have to watch the body language of my male study subjects closely. The alpha would appear confident, strutting casually around, with an air of superiority, his tail curled up in a twirl above his back. I could occasionally notice these telltale signs in the male, who everyone who knew this group of monkeys told me was the alpha – the one called 53N.

Yet he was surprisingly nonplussed about being alpha. None of the bravado that I came to expect from an alpha male, based on my experience with the Kanyawara chimpanzees that I studied a few years back in Uganda. He did not constantly run around the group, showing off his strength and intimidating rivals. Nor did other males acknowledge his superiority in the ranking by ritualized signals of submission such as a pant-grunt (a common and useful vocal signal for studying chimpanzee dominance relations but completely absent in rhesus). In short – 53N was a very relaxed alpha male.

He had immigrated into Group S about 4.5 years ago. The two other males at the top of the hierarchy had moved into Group S at about the same time – within a month or two at most of each other. All three of them were born in the same group and they were the oldest (at just over 13 years of age) males in their current group – Group S. These three males were at the top of the tenure-based queue of succession – the mean tenure length (the duration of time they had spent in the group) of the remaining 6 immigrant males was 1.7 years (between 0.5 – 3.9 years, calculated as of 1st March 2013). The males of Group S thus presented a textbook example of male dominance relations in rhesus macaques – the males who had been in the group the longest occupied the highest ranks. The males who had joined the group just recently – were the lowest ranking ones.

The three oldest males in the group (53N, 48L, and 03N) had clearly spent most of their lives in each other’s company yet they showed surprisingly little indication of any sort of long-term bonding or friendliness (again, in comparison to the easily observable signs of such bonds among male chimpanzees). Interestingly, there were also very few clear signs of competitiveness or aggression among these three top-ranking males. It was almost as if they existed in parallel realities, barely acknowledging each other’s existence. Perhaps this was because the mating season was still a couple of months away and there was nothing to fight over just yet.

By mid-February 2013, ‘love’ was in the air. Mating begins at slightly different times in the different groups of rhesus on Cayo Santiago. I saw my first rhesus macaque copulation sometime in January in one of the groups on the lower parts of the island. Mating in our study group on the top of the hill, however, did not properly get going until the end of February/early March. It was then, at the start of mating season that something quite unexpected happened.

To be continued: Part II

One thought on “The rise and fall of a male rhesus macaque: Part I”